In the gardens of Giverny, which he designs with passion, Claude Monet takes the term picturesque garden to its climax. Trees, flowers, wooden and metal architectures, garden furniture make up a moving picture that constantly evolves with the light and the seasons that the painter never ceased to immortalize in his works.

“It is only a matter of pleasure, a delight for the eyes, and also of a purpose of motif to paint” wrote Claude Monet to the prefect of Eure about his gardens in Giverny where the master expressed in the earth and on the canvas his incomparable talent for the picturesque.
The Giverny gardens are made up of two areas, the Clos Normand and the water garden.

The Clos Normand borders the house with its pink facade covered in Virginia creeper. The work undertaken by Claude Monet to make the Clos Normand a “painting made directly from nature” lasted several years after his arrival in Giverny in 1883. From a formal point of view, the organization of the Clos Normand recalls the layout of a regular garden with its central path and its perpendicular side paths, the whole providing a set of more or less open perspectives. The decor breaks the rigour of the plan: metal arches are installed in place of the pre-existing cypress trees; nasturtiums, roses, daffodils, tulips, irises, oriental poppies and peonies, climbing roses, clematis, phlox, delphiniums, daisies, bellflowers, daylilies, marigolds, sunflowers, by the thousand constitute a polychrome palette that develops over an area of one hectare. Claude Monet leaves nothing to chance, choosing each element himself. He is passionate about horticulture and never ceases to document himself by subscribing to specialized journals. Accompanied by his friend Gustave Caillebotte, painter and patron, he visits horticultural exhibitions, he talks with the great nurserymen of the late 19th century, he even tries his hand at hybridization.

Across the road, Claude Monet transformed the land he bought in 1893 into a water garden. He captures the water from the Epte to create a first pond which will then be enlarged to reach its final dimensions. As much as the Clos Normand is made up of straight lines, the water garden is a collection of curved lines. Here, the inspiration is Japanese. Claude Monet was a great lover of Japanese prints and he strives to translate his vision of the Japanese garden into reality. The result is this unforgettable water garden, imbued with great poetry thanks to its pond on which majestically floats an aquatic vegetation that Claude Monet has represented time and time again, the spectacular Water Lilies, thanks to the bridge that Claude Monet wanted green – to stand out from the red of the Levant – this bridge covered with a wisteria, also the subject of a series of paintings. The lush vegetation, including weeping willows, and the exotic bamboo forest, creates a setting that seems to separate the water garden from the outside world. 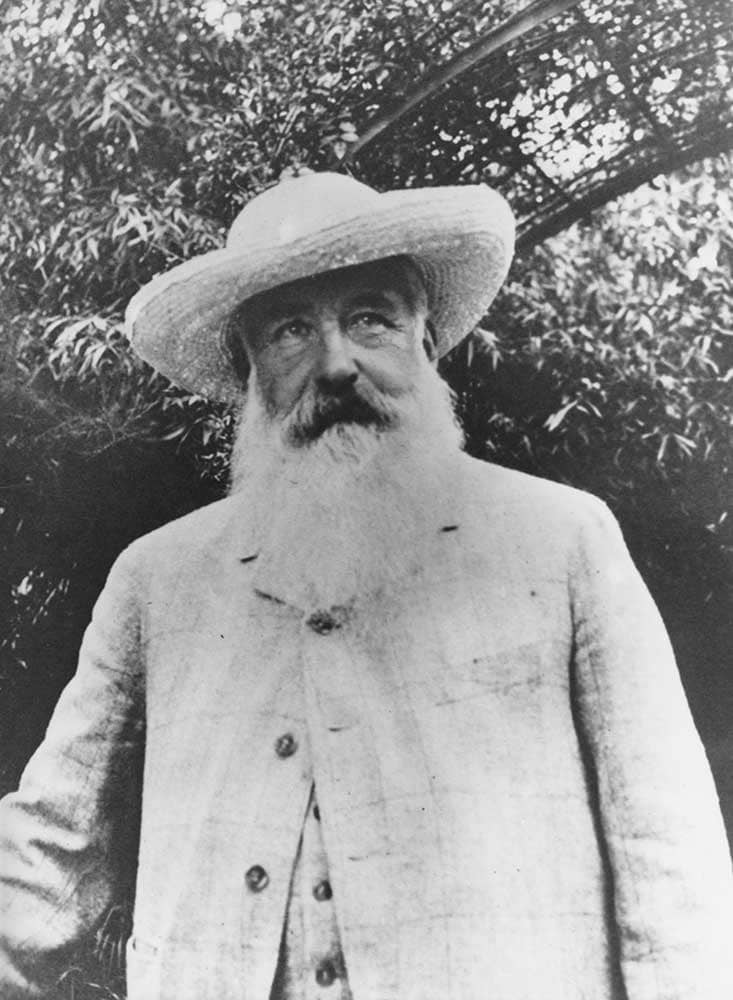 Birth and rebirth of the Giverny gardens

Claude Monet moved to Giverny on April 29, 1883. Seduced by this small, peaceful village of 279 souls, located between Vernon and Gasny, he immediately set about modeling the Clos Normand. Ten years later, not without some reluctance on the part of his neighbors worried by these strange aquatic flowers that the painter wanted to plant, Claude Monet had the water garden laid out. The artist’s attention to its creation is constant and a team of gardeners is responsible for the daily maintenance.
Following the painter’s death in 1926, the gardens of Giverny were maintained by Blanche Hoschedé-Monet, his step-daughter, assisted by the head gardener Lebret until 1947. At this date, the gardens of Giverny were no more than a shadow of themselves, and their condition continues to deteriorate over the years. In 1966, the gardens of Giverny became the property of the Académie des Beaux-Arts by bequest following the death of Michel, son of Claude Monet.
It was not until 1977, with the appointment of Gérald Van der Kemp, famous heritage curator who worked successfully at the Château de Versailles, that the gardens of Giverny were reborn. On the basis of ample documentation consisting of photographs and testimonies, the work begins with the objective of an identical reconstruction which will take 3 years.
The Claude Monet Foundation was created in 1980 and, on June 1, Claude Monet’s house and gardens welcomed their first visitors.
Claude Monet’s House and Gardens – Giverny is a property of the Académie des Beaux-Arts.

The gardens of Giverny are both a vegetal and a pictorial work, immortalized by their illustrious creator until his death in 1926.